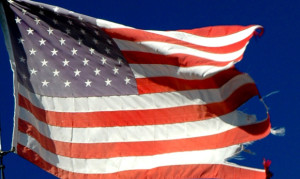 As one who loves America – not only because I am American, but even more so because I know (not believe, know) that the American experiment in forming a decent society has been the most successful in history – I write the following words in sadness: With few exceptions, every aspect of American life is in decline.

“Decay” is the word.

The Decline of the Family:  Nearly half (48 percent) of American children are born to a mother who is not married.  Forty-three percent of American children live without a father in the home.  About 50 percent of Americans over 18 are married, compared with 72 percent in 1960.  Americans are having so few children that the fertility rate fell to a record low 62.9 births per 1,000 women in 2013.  And in an increasing number of states, there are now more deaths than births.

The Decline of Education: Compared with nearly all of American history, the average American school teaches much less about important subjects such as American history, English grammar, literature, music, and art.  Instead school are teaching much more about “social justice,” environmentalism, and sex.

Any of us who receive e-mail from large number of Americans can attest to the deteriorating education – including among those who attended college – in written English.  In sophisticated commentary on websites as well as in e-mail, one encounters the most basic errors: “it’s” instead of “its”; “their” instead of “there”; “then” instead of “than”; etc.

Most universities have become secular seminaries for the dissemination of leftism.  Moreover, aside from indoctrination, students usually learn little.  One can earn a B.A. in English at UCLA, for example, without having read a single Shakespeare play.

To the extent that American history is taught, beginning in high school and often earlier, American history is presented as the history of an immoral nation characterized by slavery, racism, colonialism, imperialism, economic exploitation, and militarism – not of a country that, more than any other, has been the beacon of freedom to mankind, and the country that has spent more treasure and spilled more blood to liberate other peoples than any other nation.

The End of Male and Female: Whatever one’s position on same-sex marriage, one must acknowledge that at the core of the argument for this redefinition of marriage is that gender doesn’t matter. Marriage is marriage and gender means nothing, the argument goes. So, too, whether children are raised by mother and father or two mothers or two fathers doesn’t matter. A father has nothing unique to offer a child that a mother can’t provide and vice versa.

Why? Because — for the first time in recorded history — gender is regarded as meaningless. Indeed, increasingly gender doesn’t even exist; it’s merely a social construct imposed on children by parents and society based on the biological happenstance of their genitalia. When signing up for Facebook, one is offered nearly 60 options under “gender.” In various high schools across the country, boys are elected homecoming queen. A woman was recently kicked out of Planet Fitness for objecting to a man in the women’s locker room. She was accused of intolerance because the man said he felt that he was a woman.

The End of Right and Wrong: At least two generations of American young people have been taught that moral categories are nothing more than personal (or societal) preferences. Recently, an incredulous professor of philosophy wrote an opinion piece in the New York Times titled “Why Our Children Don’t Think There Are Moral Facts.” In it he noted, “Without fail, every value claim is labeled an opinion” (italics in original). This extends to assessing the most glaring of evils. Since the Nazis thought killing Jews was right, there is no way to know for sure whether it was wrong; it’s the Nazis’ opinion against that of the Jews and anyone else who objects. I have heard this sentiment from American high-school students — including many Jewish ones — for 30 years.

The End of Religion: There are no moral truths because there is no longer a religious basis for morality. More than the Enlightenment, it was the Bible — especially the Hebrew Bible (which was one reason America’s Christians were different from most European Christians) that guided the Founders’ and other Americans’ values. Not any more. Instead of being guided by a code higher than themselves, Americans are taught to rely on their feelings to determine how to behave. Instead of being given moral guidance, children are asked, “How do you feel about it?”

The End of Beauty: Just as morality is subjective, so are beauty and excellence. There is no good or bad art or literature. You like Beethoven; I like rap. You like Shakespeare; I like Batman. “Street art” (a.k.a graffiti) is worthy of museum exhibition; paint thrown by an “artist” from atop a ladder onto a canvas is considered high art and fetches over $100 million; and a giant sculpture of a dog with lifted leg urinating adorns the front of the Orange County Museum of Art in California.

— Dennis Prager is a nationally syndicated radio talk-show host and columnist. His book, The Ten Commandments: Still the Best Moral Code, was published last month by Regnery. He is the founder of Prager University and may be contacted at dennisprager.com.