This article was written by Paul Blair – BarbWire guest contributor 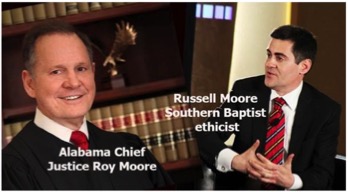 Did you ever wonder why Shadrach, Meshach and Abednego were the only three Hebrews that refused to bow down and worship the golden image that Nebuchadnezzar erected in the plains of Shinar?   I suspect that a distant relative of Russell Moore was on the scene misquoting Romans 13 to the others.

For those of you that are confused, Russell Moore, the President of the Southern Baptist Convention Ethics and Religious Liberty Commission, was quoted criticizing Alabama Supreme Court Chief Justice Roy Moore’s instruction for state officials to disregard a Federal judge’s ruling and NOT issue marriage licenses to same sex couples.

Russell Moore (no relation to Roy) was quoted in the February 12 edition of the Baptist Press to say, “As citizens and as Christians, our response should be one of both conviction and of respect for the rule of law (1 Peter 2:13; Romans 13). Our system of government does not allow a state to defy the law of the land.”

While Mr. Moore sides with Pharaoh in Exodus 1, let me explain how our system was actually designed to work.

In 1787, members of twelve of the thirteen colonies gathered in Philadelphia charged by their respective state governments with amending the existing Articles of Confederation. Before they were finished, they crafted a new Constitution for the United States.

The new “federal government” was created by a compact between the states to serve the union of states and was delegated by the compact to have few and specific powers. As James Madison clearly stated in Federalist #45:

The powers delegated by the proposed Constitution to the federal government are few and defined. Those which are to remain in the State governments are numerous and indefinite. The former will be exercised principally on external objects, as war, peace, negotiation, and foreign commerce…The powers reserved to the several States will extend to all the objects which, in the ordinary course of affairs, concern the lives, liberties, and properties of the people, and the internal order, improvement, and prosperity of the State.

According to Article 1, Section 8, this new creation was only given 17 areas of responsibility in which it held “supremacy” over the states. In case the new government attempted to exceed its limitations, it was not up to the Supreme Court to decide. Judicial review exists nowhere in the Constitution. It is ridiculous to think that the sole referee to determine if the Federal Government was exceeding its limits would be a branch of the Federal Government!

So what is the proper recourse if the Federal Government exceeds its limits? In 1798, the author of the Constitution, James Madison, wrote in the Virginia Resolutions:

…in case of a deliberate, palpable, and dangerous exercise of other powers, not granted by the said compact, the states who are parties thereto, have the right, and are in duty bound, to interpose for arresting the progress of the evil, and for maintaining within their respective limits, the authorities, rights and liberties appertaining to them.

…by a compact under the style and title of a Constitution for the United States, and of amendments thereto, they (the states) constituted a general government for special purposes — delegated to that government certain definite powers reserving, each State to itself, the residuary mass of right to their own self-government; and that whensoever the general government assumes undelegated powers, its acts are unauthoritative, void, and of no force.

If I was to send Mr. Moore a letter on official stationary demanding that he paint his office lime green, he would be under no obligation to do so as I have no authority over him in the matter. The same holds true when the Federal Government attempts to act outside the seventeen specific areas in which they are allowed to act.

In America, we have no king. The people are sovereign and “We the people of the UNITED STATES” created, designed and then delegated few and defined powers to the general government. So in accordance to Romans 13, Judge Roy Moore and the State of Alabama are attempting to uphold Romans 13 from those seeking to undermine the Rule of Law.

The Federal Government has no legal right to force same sex marriage on states that do not want it and have amended their state Constitutions to not recognize it. The Federal Government also has no authority to force states to allow the murder of pre-born babies. However, the courts will continue to do whatever they want until some state actually has the courage to say no.

Christians, the law is on our side. We have the Biblical right, the legal right and the moral responsibility to end the attack on natural marriage and also to end the murder of 58 million pre-born babies.

We must decide whether we are a union of states who delegated limited powers to the Federal government to serve the states in areas of general welfare or recognize that we are now 320 million individuals RULED by our Supreme Leader in Washington DC along with nine politically appointed attorneys.

But Mr. Moore, please understand the ultimate consequence of your position. When a federal judge somewhere rules that a pastor must perform same-sex “marriages,” or that churches can no longer preach that sex outside of marriage is biblically immoral, you will have already consented to this unlawful affront against God and His church by what you said on February 12th. What will you do then?

Paul Blair was raised in Edmond, Oklahoma, and was a three year starter at offensive tackle for Oklahoma State University. After college, he was a Fourth Round Draft Pick of the National Football League’s Chicago Bears in 1986; he was one of only three rookies to make the team of the defending World Champion Bears. He spent five years in the NFL, and retired after the 1990 season due to a fourth and final knee injury. As Founder and Chairman of Reclaiming Oklahoma For Christ, and current Chairman of Reclaiming America For Christ, this Patriot Pastor’s desire is for Americans to understand their Christian heritage.

One thought on “Two Moores, Only One Is Right!”